You may have noticed that my posts have been all over the emotional map for the past ten weeks.  I tried to stay on topic.  But I couldn’t. I was too preoccupied by wildly fluctuating hope, joy and despair.  Manic would be an appropriate description.  And what else other than out-of-control peri-menopausal hormones would bring on such mood swings?  Well, you know what?  I don’t really want to go into it.  Let’s just say it’s time to dust myself off and resume regularly scheduled programming.

As the weeks progressed and it became clear that I was not going to have the happy ending I wanted, I found myself seeking solace in the things I love:  teaching yoga and writing.

My mind would not settle long enough to write anything more than a few short essays.

But the yoga?  The yoga was a blessing.

I filled classes with gentle heart openers and soothing forward bends.  When I needed grounding I took classes through strong Warrior sequences.  When the friendship was going well I celebrated with Flying Dragons.  And when it wasn’t we did Flying Dragons anyway.  In my Yin classes I challenged myself to teach poses that wouldn’t be my favorite.

At home, I began the meditation practice I’ve been talking about since August.

But the last two and half months have left me in this strange place of being grateful for the experience of love and connection – no matter how brief the time was – yet mourning for the tremendous loss.  I’ll admit it.  I’m sad.

It seems sometimes that because we practice yoga, because we are teachers, we somehow have the means to rise above heartache.  It’s not true.  I teach yoga. And I’m human.

The truth? There’s nothing to report.  A few posts back I was in a bad way.  The hormones were taking me for a mad ride and I didn’t know which way to turn.  But then, in a rare, bright, lucid moment, I decided on a three-pronged attack:  acupuncture, exercise and massage.

It worked.  I’m back to my normal, well-balanced, chronically optimistic self.  It’s a great feeling.

Was there one therapy that seemed most effective, or did they work symbiotically?

The acupuncture in combination with the herbs my acupuncturist prescribed and increased cardiovascular exercise were great co-captains.  Body therapy in the form of a few Rolfing sessions and one perfect chair massage became important team players and helped to reduce stress.  I also improved my diet by reducing sugar, caffeine and alcohol in favor of whole grains, fish and vegetables.

I wish there was an easy answer that didn’t involve manipulating our body chemistry with Big Pharma.  But the bottom line is, we’re all different.  As we go through this transition the most important thing we can do is stay in touch – with our bodies, our emotions and with each other.  For every woman who claims she “sailed through” menopause there will be one who believes she is lost and alone.  In my case, I felt silly admitting how bad I was feeling.  I’m a yoga teacher.  Shouldn’t I be the poster child for well-balanced good health?  Once I realized that even yoga teachers lose their equilibrium from time to time I became proactive and sought advice from friends and medical professionals.

Acupuncture and massage can stretch the pocketbook but a brisk walk around the block is free.  My symptoms – the raging mood swings and the frightening emotional plummets scared me into taking action.  But I had the time and the freedom to explore options.  I asked for advice and then chose the approach.

Exercise is easy; looking at what you’re eating and then making subtle dietary changes towards wholesome, living food is doable.  We should all be exercising and eating well whether we’re moving toward menopause or not.

But as a peri-menopausal woman, deciding if our symptoms are severe enough to require ‘chemical intervention’ – whether it’s in the form of Chinese herbs or artificial hormones – is difficult.  I must admit to feelings of failure when I finally admitted I couldn’t navigate this passage on my own.  But those feelings disappeared the moment I began to feel better (which was almost immediate following the first acupuncture treatment and the start of the herbs).

The bottom line is, we want to feel our best – for ourselves and for the friends and family we love. I’ve chosen a path that has put me back in touch with the person I’ve always been inside.  What solutions have you tried for relief of symptoms associated with menopause? 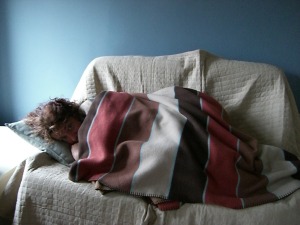 Looking back, I showed considerable restraint.

“Why don’t you just go to a doctor and get a pill?”

This coming from a man who has never been and is never going to be the poster child for good health.  Besides, what does a man know about it anyway?

Some women flush, some sweat.  Others deal with insomnia while some unfortunate souls juggle all three with swinging moods thrown in for good measure.  For me, peri-menopause – otherwise known as the “Transition” seems to be all about my mood.

Life was so simple just a few short years ago.  How I long for the time when I enjoyed seven simple days of general malaise followed by my flow – and the wonderfully manic high that followed as my hormones swung in the opposite direction.

But my formerly light yet lengthy pre-menstrual tension had, over the past twelve months, boiled itself down like an over-reduced sauce to forty-eight hours of mournful hell.   Seriously. You really did not want to be a bicyclist running a stop sign during those two days if I was on the road.

Yet my body had one more trick up its sleeve.  Just as I was growing accustomed to Mimm’s Evil Twin making an appearance every thirty-days she was traded in for a hormone storm of such ferocity that I could not fathom there would ever be an end.  I fell into Alice’s dark rabbit hole.  I fell and fell for days until a breakdown during my writer’s group (we’re talking mild hysteria, twitches and unstoppable tears) made it clear to me I needed help.  I was losing my peri-menopausal mind, and I wanted to find it again.

This is usually the moment when one of my wonderful, older clients chimes in with, “Menopause?  I sailed right through menopause.  Don’t even remember it.” Of course she doesn’t remember.  It was thirty years ago.  While she was peri-menopausal, the rest of the world was watching Dallas and trying to figure out who shot J.R.!

I guess the truth is, some women do ‘sail through’.  But not me.  It’s embarrassing.  I’m a yoga teacher, for Pete’s sake.  Things like a few hormone fluctuations shouldn’t bother me.  I wish. Even though I have a reasonable diet and a daily yoga practice I know that it will take more to manage my symptoms.  But hormone replacement therapy is a last resort.  For now, I have a three-point plan of attack:  acupuncture with Chinese herb chasers, Rolfing and, of course, Yoga.

I have another ten days before my hormones take a swing toward the dark side and so it is too soon to know if my complementary approach is useful.  I can tell you that, for now, the black mood is gone.  This post is proof that I’m writing again – I’m functioning.  But will I crumble again on December 20th?  I’m not planning on it, but the truth is I just don’t know.

And now, the disclaimer.  I’m single and childless and can indulge my whims.  If you’re suffering – see a doctor.