The thing about truth is that it’s not solid. It’s not one thing. It’s filled with light and shadow and nuance and biography. What is a wonderful truth for you may be devastating to the person sitting next to you on the bus. I suppose, too, that we can choose how we feel about a truth. For example:

Donald Trump is president. How do you feel about that truth?

Of course, some truths are absolute. They have no nuance, no foggy shadow blurring the edges. They are clear truths that stand on their own and have not been muddied by the filter of life’s experiences. For example:

Two plus two is equal to four. I’ve only met one person in my life who will debate this arithmetical truth, a fellow student during my graduate studies and a psychotic provocateur whose one mission in life was to irritate the sane, rational minds of our cohort (this is an opinion, not the truth).

I’m pondering the question “what is true?” because there is a great and varied debate about the origins of yoga in the West. Among my friends and fellow teachers, there are some who begin America’s yoga journey with the arrival of BKS Iyengar. And as much as my practice and teaching is informed by Iyengar yoga, I respectfully disagree.

When I consider the story of yoga in the West I fall into the camp that looks toward the Transcendentalists, for whom I’ve always had a soft spot. In particular, Ralph Waldo Emerson and his buddy Henry David Thoreau, who has been called ‘The First American Yogi’.

But is that true? Did Thoreau know anything about downward dog or sun salutations? Did he begin his day with a brisk Ashtanga Series I or a simple slow flow? No. But Emerson and Thoreau were entranced by ‘Hindooism’ and we’ve been taught that when Thoreau decamped to his pond in 1845 he spent much of his time in deep contemplation; perhaps meditation. He was mindful of his actions, aware of the world around him and in communion with nature. Henry David Thoreau was a student of yoga. 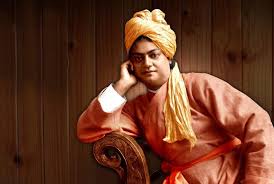 It was Vivekananda’s arrival at the World Parliament of Religion, however, that sowed the seeds of yoga across a wider receptive audience. His delivery of twelve off-the-cuff speeches stole the show and made him a sought-after teacher of the yama and niyamas, pranayama and Kundalini. Vivekananda’s yoga was Raja (Royal) Yoga. Raja Yoga is the practice of attaining unity with the mind, body and spirit. In other words, attaining a state of yoga. It differs from Hatha Yoga in that while Hatha intends to still the mind through the body and breath, Raja brings the practitioner to a state of yoga through the control of the mind. Hatha prepares the student of yoga to practice Raja. The practice of asana is not the key element in Raja Yoga as it seems to be in Western Hatha Yoga, and Vivekananda ignored asana. That doesn’t mean the practice of asana isn’t important, but the practice is intended to build strength and flexibility in order to tolerate long hours of sitting in meditation.

I know that I’ve skimmed the surface. Perhaps I’ll continue to explore how we all landed here and that will inspire more writing. Still, what I’ve written here is, for me, the truth of how Yoga came to America. The documented truth of Vivekananda’s impact is enthralling.

Yoga was here, in America, long before Jois or Iyengar or Bikram. But the story of asana, and how it came to America and morphed into a six-billion dollar industry…well…that’s a different story and a different truth.

“Each soul is potentially divine. The goal is to manifest this divinity within, by controlling nature. External and internal. Do this either by work or worship or psychic control, or philosophy, by one or more or all of these – and be free. This is the whole of religion. Doctrines, or dogmas, or rituals, or books, or temples, or forms, are but secondary details.”