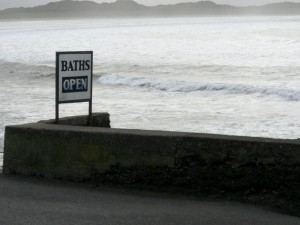 It the middle of March it rained for two days. In fact, both days were gully washers. But even with four feet of new snow in the mountains, it won’t be enough.  We need another good few weeks of wet weather to make a difference in the drought conditions in Northern California. And so, despite this being our third dry winter, last month’s temporary need for umbrellas and galoshes will convince many to relax.   That water conservation isn’t urgent. It rained, didn’t it?   There is no need for worry.

Unfortunately, their complacency is misplaced.

Do you have any idea how many gallons of water per day your household uses? When my utility bill arrives I never look beyond the amount of money I owe. If I did I might learn a bit about my water habits.

Where does all that water go?

Conventional shower heads flow at five gallons per minute. That’s fifty gallons down the drain in one ten-minute shower. Install a low-flow shower head and cut your shower time in half and you’ll save twenty-five gallons of water.

Do you leave the water running while you brush your teeth? While you shave? Say goodbye to another two gallons. Turn the tap water off while you brush and install an aerator to save even more.

In the 1980’s we were fond of saying, “If it’s yellow, it’s mellow.” Toilet flushing was taboo – and for good reason. Each flush washes, on average, another five gallons down the drain.

Committing to a mindfulness practice of water conservation shouldn’t be limited to periods of drought. We should always be aware of how we use natural resources. The water we drink, the air we breathe, the lands we plow and cultivate are gifts. I think that we forget how precious these gifts are.

Even thinking of them as gifts is wrong. They are a part of us. When we abuse and misuse our resources, we are abusing and misusing our selves.

I asked friends if they had a favorite way of conserving water. The suggestions I received varied from the humorous (drink more beer) to the extreme (become a vegan). And then there were the suggestions that we all know. Some are simple. Others require more work. Some are practical. Others require us to create new habits and new ways of being in the world:

I think we do.

If you want more water saving tips go to the SCWD website save20gallons.org.

One thought on “How I Learned to Love My Dirty Car”