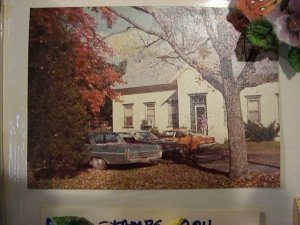 On my mom's fridge: a photo of house I lived in as a child.

I don’t know what to say about the past month.  I’m pretty thrilled February is barreling right into March.

I broke up with my critique group this week.  It had been fomenting for months, but I couldn’t find the courage.  Each time I summoned the strength to leave, someone else would drop out or move or drift away and I would feel the guilt of their leaving strong enough to enroll for another eight weeks.  Now that I’ve finally let go, I’m wondering what not having five fresh pages to share each Wednesday afternoon will do to my writing.

It wasn’t your typical critique group.  We didn’t see one another’s work until the day we met, and then we had fifteen minutes – sometimes twenty depending upon who was in attendance – to read and receive comments.  My strategy was to bring in about five minutes of reading so I could receive ten minutes of review.  Others in the group enjoyed spending most of their time reading, with little time for feedback.

At the end of the day, though, the group gave me discipline.  And developing discipline is priceless.  I wouldn’t have a novel length manuscript under my belt if our leader Terry Galanoy hadn’t said, “That’s a good idea.  I want five pages next Wednesday.”  Classic critique may have been pretty thin, but encouragement and support was heaped upon me.  I’ll miss them.

In February I received my Get Out of Jail Free Card.  This is more difficult to explain.  I guess I had one of those experiences that cast a sliver of light on a very dusty part of my soul.   I had an awakening, of sorts.  A door opened.  That’s a good thing.  But if you’re old enough to remember the opening sequence of the 1960’s classic “Get Smart” then you know that behind the open door is…another door.  In other words, I have an awful lot of work to do on myself before my Get Out of Jail Free Card is valid.  I reckon a good couple of years.  But when that final door opens – it will be well worth the work and the wait.

At my penultimate meeting with the critique group, the only other women attending that day asked me, “What is your theme?” The men were staying shtum as the scene I had read was about a protagonist’s first menstruation.

I couldn’t answer her.  I hemmed and hawed until at last she answered for me.

“You are the sum total of your experiences.  Or not.  There has to be room for potential.”

I am the sum total of my experiences.  Or not.