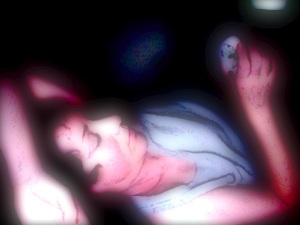 While 90-year-old Reva is off gallivanting in Maui I’m back in Palo Alto, taking care of her overweight and tragically arthritic cat Koko.  Still, I have good news.  My life is officially more exciting than anything I can find on basic cable.  Comcast?  You’ll be getting a call from me today, and you’re not going to like it.

The bad news?  I’ve got some whacked out Vata imbalance.  At least that’s my story and I’m sticking to it. Case in point: At 9:30 last night, after teaching seventy-five minutes of Yin in a darkened room, I walked into my local Whole Foods, grabbed a guy with a beard down to his belt line, held him up against a wall by his cute little green Whole Foods apron and said with clenched teeth, “Need Kava Kava…now”.

In addition, as I type it is three o’ clock in the morning.  Yep.  Three in the bloody morning and what am I doing?  I’m writing a blog post.  For someone who would, under normal circumstances, sleep through the Second Coming – something’s up.

I am not an expert on Ayervedic medicine, but I know enough to know my Dosha.  It is predominately Pitta, leaning toward Kapha. Fiery with a smattering of easy-going Sloth-dom.  But Vata, at her worst, is all air tossed chaos.

Two weeks ago, when my appetite disappeared, I thought it was a fluke.  It happens to me from time to time. The last time being 1977.  I thought I was lucky – I’d finally lose the ten-pound “writer’s spread” I gained over the past year.

But then a few curious, totally un-Mimm like symptoms arose.  For instance, a total disinterest in television.  I couldn’t care less what intriguing case Dr. Gregory House has to solve.  It’s probably lupus anyway.  What about Meredith Grey and her Alzheimer’s study?  Not interested.  And while I’m vaguely interested in discovering if Lauren Graham’s character on Parenthood finds true love, it’s not enough to make me want to wrestle the remote from Koko’s snarled paws (Koko has a lot of time on her hands.  I think she watches Law and Order Marathons while I’m at work. I prefer hospital dramas.  I could say “myocardial infarction” by the time I was five.  Give me an ER Marathon – the early seasons with George Clooney – and I’m in).

Television has been my comfort box since I was three years old.  Right there with a heaping bowl of cheesy instant mashed potatoes. If I’m turning my nose up to both – something’s not right.

But there’s more.  Did I mention the racing heart?  The full on shaking crazies that yesterday turned what was supposed to be a gentle class for my chronic pain group into Yoga Bootcamp?  And this is without caffeine.  Because I lost my taste for coffee about six weeks ago.

On their own the physical symptoms might be enough for one to want to schedule an appointment with their primary care physician. Feeling as if I’ve just mainlined four Starbucks Venties while trying to teach a Yin class is uncomfortable at best.  But I’ve had some changes in my life that may account for how I feel.  The first is I’ve dramatically increased my cardiovascular exercise.  I went from – uh – no cardiovascular exercise to hitting the elliptical four to five times per week for an hour each time.  That will increase my energy and metabolism, and may account for my decreased appetite.

And then there’s the whole Reiki thing.  Don’t tell anyone, but I’m a Reiki Master.  Yeah, I know.  You wouldn’t really guess that by looking at me.  The thing is, except for a single hour of practice last August during Yin Teacher Training, I hadn’t accessed the energy in years.  Thought maybe it was a lot of patoohey.  Ok.  I’m telling a lie.  The truth is, I think I was afraid of Reiki.  Practicing Reiki meant having to access a basic truth about myself that perhaps I was trying to avoid.  (What truth?  Sorry, that’s between me an my therapist.*) For some reason, however, over the past few weeks, I’ve explored Reiki’s possibilities.  Recharged my Reiki batteries.  And I’ve been working with the energy for myself and for a number of friends who are struggling.

The result? I feel as if the Berlin Wall wrapped around my heart for the past thirty years has been torn down.

Is that why I feel as if I’m vibrating?  Why I’m experiencing every waking moment as this freakishly intense burst of energy?  Why I can’t sleep or eat and why those cute little Glee kids have lost their Gleeky hold on me?

I like to believe that these changes are the result of positive choices I’ve made.  The work I’m doing on myself physically and spiritually.  If the alternative is that I’ve entered another new and…ahem…delightful phase on my way to becoming a Crone – that is, if it’s all a cruel menopausal joke – a simple case of haywired hormones running amok or – even worse – all in my head – then maybe I won’t be giving Comcast a call after all.

Well.  That little clock on the right hand side of the screen says it’s 3:55 AM.   Time to tuck the laptop back under the bed, roll over and let the dulcet tones of my pounding heart lull me back to a fitful sleep.

*Here’s the truth:  I feel as though I’m operating on a different level of energy – that somehow, finally, I’ve found the portal to my authentic self and that I really am this kind and this good and this gentle.

3 thoughts on “Be Still My Beating Heart”