Her tone is all sandpaper and honey. “Oh. It’s you.”

“Did you not recognize my voice?”

She can keep wishing. Yes, I know it would comfort her. But my name hasn’t been Robbie for two decades. My name is Mimm. And I don’t have enough compassion for the woman at the other end of the line to offer comfort. The word ‘mom’ sticks in my throat like dry toast.

I loathe self-indulgent stories of dysfunctional families. Especially my own. I’ve spent the last thirty years running as far away from mine as possible. But a craving for connection inspired me to write to the mother I had not seen for twenty-eight years. And now, every other week since our reunion in September 2010, I go through the motions of play-acting the dutiful child and pick up my phone, scroll to her number and push ‘send’.

Weather is a neutral topic so we continue to discuss the snow on her coast and the sunshine on mine.

As we talk, I can hear my mother settling into the same Levitz Brothers sofa she’s had since we lived in the old Lynnport Schoolhouse. Built in 1814, the two-room school was converted to a family home in 1959. We took ownership the summer of 1966. Eight years later, when I was a junior in high school, my mother’s third husband Earl (the one who, when I was fifteen, told me I had nice breasts) put carpeting in the living room. We needed a new couch to match the new wall-to-wall and when the boys from Levitz brought it through the front door of the schoolhouse it was a rusty orange tweed with brown flecks.

Forty years of nicotine, however, has turned it to flattened tarry umber.

No matter. A single bulb illuminates a corner of the cramped room. The curtains of the creaking double-wide trailer my mom moved into after she sold the schoolhouse are drawn. Everything is in bleak shadow.

She holds the receiver with her shoulder and reaches for her pack of Smoky Joe’s Vanilla Cigars sitting across a coffee table littered with books, one ashtray, the same caffeine stained cup she has sipped from since 1974 and a half empty plastic tumbler of tepid water. I hear the click of the lighter, her rasping inhalation and then, ‘The Sigh’.

“You don’t know what it’s like, Robbie. How lonely it is.”

I’m rankled. She can’t tell me what I know or don’t know.

“You don’t know how lonely it is.”

The September weekend in 2010 when I come home for the first time in twenty-eight years I circle the cul-de-sac in my rental car and park. My seventy-seven year old mother is waiting, smaller than I remember. Hunched. Her grey hair is styled in a shoulder length pageboy.

She fries pork chops in a half stick of butter and serves them with fake crab in mayonnaise. I drink diet root beer non-stop. I never drink soda. But in her kitchen I can’t have enough.

The lines of defense are drawn early.

“What was I supposed to do, Robbie? I was working.”

“I didn’t have to worry about you,” she says. “You stayed in your room. You were playing your guitar. I had my hands full with your sister. I thought you were all right.”

I was a child. I wasn’t all right.

The next day I ask, “Are there photos of my dad?” They divorced before I was two. I have no memories of him.

She walks to the small room that serves as a den at the end of the trailer and retrieves three thick scrapbooks. For hours we sit at the Formica table in her kitchen and I listen to stories that I’ll try to remember about relatives I never knew. Men who died in wars. Women who died having babies. I discover I had a Great Uncle whose claim to fame is writing the music for the song Dainty Flo From Idaho.

She opens the last black and battered scrapbook and says in a voice that feels like a rusty, broken blade being dragged across my skin, 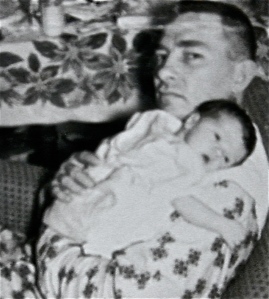 The black and white image is no bigger than half a business card. There’s a small silver Christmas tree and a pile of opened gifts in the background. He wears flannel pajamas and his dark hair is styled regulation Air Force. He’s leaning back, cross-legged knee over knee in an upholstered chair, looking into the camera from the corner of his eyes, unwilling to turn his head. Unwilling to disturb the tiny baby on his shoulder. On the back of the photograph, in my mother’s Palmer script it says ‘Daddy and Robbie, Dec. 26, 1958’. I am thirty-three days old.

This is my father. I know that it is because he holds that tiny baby – he holds me – with tenderness. Within twenty-four months he’ll disappear and I will never see him again. Ten years after that his girlfriend, broken by anger and violence, will shoot him three times in the back. But in this photograph – in this single moment – the large, warm hands of my father hold me.

I wasn’t prepared. I step back and begin to sob. I don’t know where the brutal hot tears are coming from but as the guilt and worry and wonder of my entire life boils through my body I wipe snot on my sleeve only to be shaken by another burst of tears.

“What are you crying about?”

I suck back a wet staccato breath and say, “I don’t know where I fit in the world. I can’t figure it out.”

My mother looks at me and says, “You’re like me. You’re naïve.” She chuckles and adds, “You still believe in love.”

When my mother was in her early 50’s, and twelve months after I disappeared from her life, she met Tom. They were together twenty-five years. He died a few months before I reappeared. Standing in her kitchen it is clear to me she is still in mourning. After four husbands and countless boyfriends she calls Tom the love of her life.

She was a late bloomer, my mother. I hope that I am, too.

Six months after our reunion, I pick up the phone. I need to talk to my mom.

“The storm blew the skirting right off the trailer.” Her voice crackles down the line. “The wind was awful.”

“There’s two inches of ice on the deck.”

And I want to tell her it’s complicated. That I am heartsick. I want to ask her what to do.

“They say we’ll get another four inches of snow.”

I want to ask her the things a daughter asks a mother. But I can’t. There’s a storm coming in.

I’ve worked on this essay for a number of years.  It’s been submitted and rejected numerous times, as is what happens to every writer.  So, at last, on this Father’s Day, I’ve decided to post it here and move on.

There are other stories to tell.